I have a set of CA-Superproject’s installation disks and it has been an ambition of mine to see if I can run it on a modern Laptop. My edition failed to run on Windows XP and when I read about W98 and Virtual Box, I decided to see if I could install SPJ on modern desktop platform. I liked SPJ for a couple of reasons, it’s much better than MS Project, it deals with time and money and it has a PERT view which I used to prefer for project planning because it aligns with product based planning in a way that Gnatt charts don’t. Here are my notes …
I made a version of a W98 virtual machine, there are plenty of tutorials and I also documented how I did it in my Virtual Box article.
I bought a floppy disk reader, installed it as a host readthrough as floppy 0 using the virtual box console. I had some problems refreshing the file system cache and so I decided to copy each disk to a folder, imaginatively called D[1-3]. I used the xcopy command with the /s & /n switches. /s to force the sub-directory copies and /n to ensure that names are handled correctly.
It seems to work, I’ll need to get networking going to connect to the printer and maybe to organise some file transfers. There are sadly significant limitations in the screen size which may be solved with a big screen but that’s someway out. 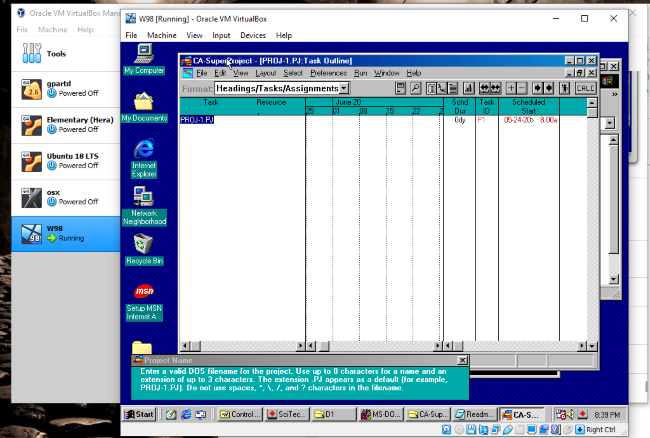