Open Labour won one seat in Labour’s NEC CLPs division elections in 2020. They clearly have an attraction to many members and MPs but their record of actions makes me question how left they are. Here are my notes.
Open Labour, {wikipedia page} claim to be a soft left group stating on their home page

Open Labour stands for transformative, left-wing politics. Our socialism looks outwards to the voting public, is honest about the political challenges we face, and encourages an inclusive & pluralist ethos within the Labour Party.

Their use of plebiscites to take major positioning decisions, such as their decision on who to support for the 2020 Leadership election, they chose Lisa Nandy, and who to support for the NEC where they chose to support Ann Black and Jermain Jackman and Alice Perry, people who arguably brought more ‘brand value’ to the table than OL. It almost certainly exposes the problem with OMOV if there is no democratic debate, that only the well known win. It should be noted that their supported candidate for the disability rep who was not supported by Disability Labour did not do so well.
OL have a sort of programme statement, “Open Labour: Rebuilding Labour Together“, which is pretty wishy washy declaring a commitment to internationalism which talks exclusively of the past and Brexit and on immigration they say this,

Open Labour believes that the UK should be open and welcoming to those coming to the UK, whether refugees, asylum seekers, students, workers or those coming here for family reunion.

While this can be aimed at the Campaign Group also, where are the MPs who support them, and what do they stand for?
Open Labour seems to be exclusively moving in the orbit of the current leadership or more worryingly its right wing outriders , and  frankly unless you join, impossible to engage with. They occupy an important space and yet fail to speak for those who are there with them.

Ann Back was re-elected to the NEC with Open Labour’s support. She got 7,813 first preferences which was 60% of the Quota, she picked up a bunch of preferences as the the Tribune slate was eliminated. The chart below shows how the slates’ top performers did compared to the quota. 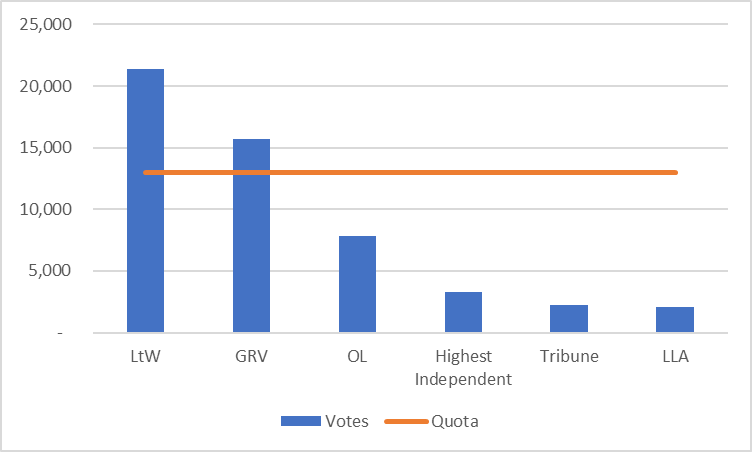 Open Labour’s second candidate, Jermain Jackman got 3,250 but was not excluded, this is more than the LLA & Tribune slates but was one short of the highest scoring independent, Dave Anderson, who has an impressive CV, being an ex-MP and ex President of Unison, more so than the Tribune slate candidates.
Jermain’s campaign got into problems, partly due to his inexperience. He had applied to Momentum for support before applying to Open Labour. Many of his supporters wrongly claimed that he would have been the first black man to sit on the NEC but he also was involved in some way with the “Socialists of Colour” site which accused several candidates of antisemitism.While robust opposition to antisemitism should be a prerequisite for being on Labour’s NEC, what happened over this site was not useful politics; it did nothing to reduce antisemitism in the Party.

I have tagged some articles openlabour on diigo, which sort of have more words by them about the programme, and their responses on the two critical ongoing internal affairs, the leak and the EHRC report.