Confidence of the House

Prime Minsters come but always go. It’s meant to be one of the advantages of a parliamentary system but how many have we lost because they lost the confidence of the house. Here are my notes. …
In the chart below, the icon of wheelchair and drip signifies ill health and the guy hurrying through the door signifies a coup or resignation. 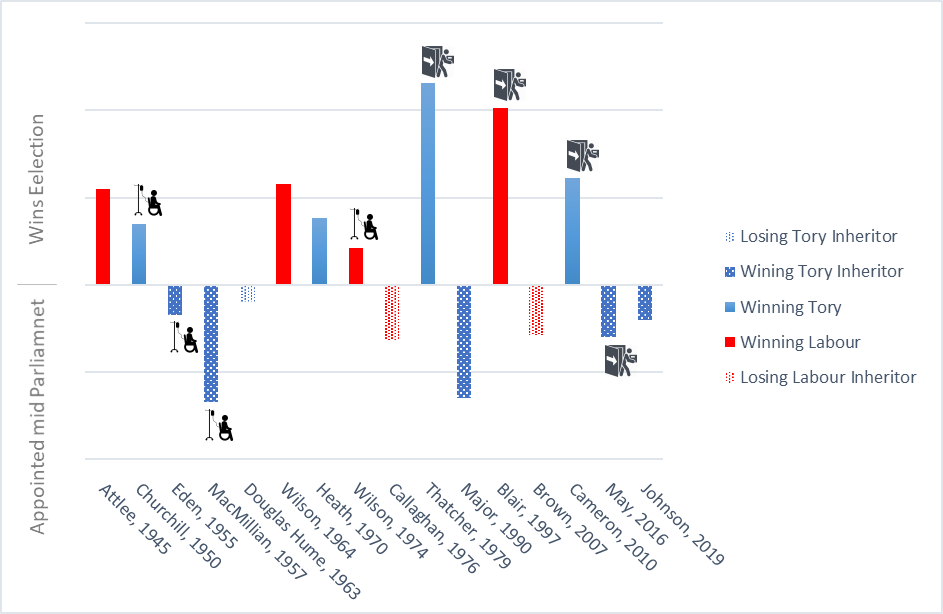 Macmillan & Cameron are interesting. Macmillan had lost the confidence of his parliamentary party, what with all the shagging, but he had enough control to deny those who were plotting the succession. They didn’t do anything as vulgar have elections in those days. Cameron didn’t go through ill health, unless not being arsed has become a medical condition, so I count this as a coup.
UK Parliament is getting younger so less ill health resignations. All the recent resignations have been “pushed”.
Oops! I have missed Churchill who resigned on the grounds of his health.
Eden called a general election and so should be seen as a winner and not a loser. This shows the shocking success of the Tory Party in selecting its premiers as election winners. (If Maudlin or Butler has succeeded McMillan, and then beaten Wilson, our governments would have looked like Italy or Japan.)
In my article, “On Presidentialism“, I summarised Mainwaring and Schubert, with the following words,

Fixed terms Presidencies are a barrier to a change in the popular will of the masses, this is a feature of the nature of coalitions required to win, and the rules of succession which rarely consult the electorate. Parliaments can recall a Premier.