Thinking about defence policy, there’s going to be another review. This started as a collection of articles leaked or inspired probably by senior army officers but in Nov. Johnson made a financial announcement seemingly in advance of the review announcement which led to me doing some reading and looking at previous strategic reviews, the armed services pay review board report, and further technology reviews. I suppose the question is do we know what we’re doing, and I think the answer is “No”. But at least they’re not dressing up in camouflage greens. For me, the first thing that is required is a threat analysis, it all stems from there and I don’t think the Tories who have been in charge for the last 10 years have it right because amongst other things, they’re fucked over the EU & NATO. Anyway, here are my notes and links.

Will we keep the Marines and Tanks? 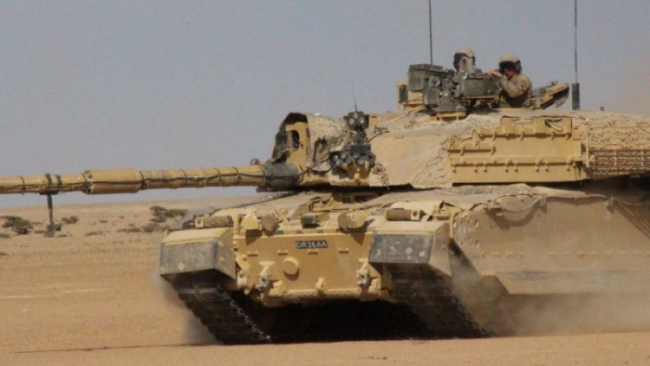 Here’s a video on dropping the Armour, by Matsimus, he’s good on the intellectual threats to armour, talks of sunset/sunrise weapons.

The Times reports that four infantry battalions are to go, aimed at multi-battalion regiments so no more regiments are shit canned. 16 Feb 2021
Based on a press statement from MOD that the UK would not be reducing the number of Tanks, and a summary of the review by Defence News, which on Tanks says,

The Army is upgrading the Challenger 2 tank fleet at a cost of £1.3 billion, but only 148 vehicles will be improved.

Here’s some stuff on Cummings’ involvement,

Cummings has been fired so where does this leave the Defence Review? It seems in a very healthy, if not accelerated state. Boris had to make an announcement, and did so, stating that the Defence budget was to increase by £16½bn but added a bullshit justification about the pride of the nation, and a reversing of decades of cuts. We need to note that it’s Johnson, that has reversed the decision to withdraw from “East of Suez” although it was Brown who ordered the Aircraft carriers that have no other use. [Independent || Guardian] Kier Starmer’s comments are accurate here, strategy follows a threat analysis and programmes follow strategy. Johnson offers neither.

The press stories still suggest a reduction in tanks and army personnel, a good head line summary is here in “Defence News”

Global Britain in a Competitive Age: the Integrated Review of Security, Defence, Development and Foreign Policy

Here’s the Govt SDR hosting page and here is a thread by Dr Phil Weir about the Indian Ocean. (An OPV stands for Offshore Patrol Vessel, is between 1,00 & 2,200 tons, so small, but in use by the Thai Navy.)
The Govt’s hosting page says, and this is heavily edited for the sake of brevity,

In this context, the Integrated Review sets out four overarching objectives:

Johnson side stepped the allegation that it was Cameron’s 2010 SDR that fucked things up, although I would add the decision by Labour to build two “fleet” aircraft carriers, as part of the problem. Here is a House of Commons Research Paper on the 2010 SDR, hosted on the wayback machine, full of statements on the political direction 😳. This quote is quite amusing,

Equipment programmes cannot be based on wish-lists or the fantasy world of what we would like to do if resources were unlimited.

Cameron’s review, confirmed a further shrinking of the Army, and cuts to the number of tanks, self-propelled guns and the withdrawal from Germany. It confirmed cuts to the surface fleet, and shit-canned the Harriers. The aftermath of this review led me to say that the armed forces now had aircraft carriers without warplanes, a tank regiment without tanks, a guided missile destroyer without missiles, a fighter bomber too old to use and the smallest army in living memory incapable of successfully fighting an expeditionary force, certainly alone, I should have added transport command without transports, but we had four ICBM submarines.

What is Johnson’s new money buying?

I was curious to see what had happened to Soldier’s Pay. It is not easily available on google. I did find the 48th report of the Armed Forces Pay Review Board which recommended a further 2.9% pay increase despite being leaned on to take on board affordability; I hope the people get their share of the £16½bn.
However, with help from my MP, Vicky Foxcroft, I obtained some numbers on Sergeant’s pay, and obtained further data on UK Defence spending and military manpower, which I present in this chart. 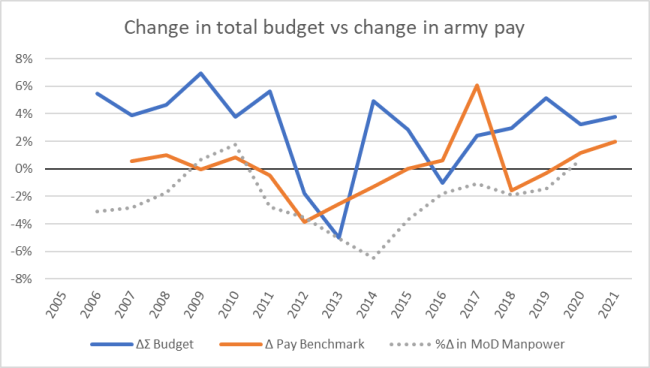 Change in total budget vs change in army pay

The Daring class destroyer, of too my mind, a cruiser deplacement, has a speed of 29 knots, the Persian Gulf is about 93,000 sq. nautical miles and 98.5 nautical miles long … the F35 speed is 1,200 mph (1,042 knots).
I wrote a piece on Trident Renewal in the blog published on May 2916, but written earlier as Labour took down the original posting. It identified failings in the then current defence estate, I am not sure the extent to which these have been filled, it seems that the Type 45 Destroyer now has an effective air defence system, the Sea Viper took some time to come good. We plan to increase the size of surface fleet, the tank regiment is now using tanks again. I am not sure if we have invested in sufficient airlift capacity. It seems we now plan to buy two littoral strike ships, which have the advantage of being cheap, but if so, we’ll need to keep the marines and probably dedicate some AA & ASW ships to protect them. The discussions about the LSS’s make clear that the Navy envisages two fleets, Atlantic & Far East; I think this is a mistake and cannot be justified by a threat analysis, WTF are we doing back East of Suez.
I am not sure if the surface-to-surface missile problem has been solved? The fleet escort solution seems a mess, with type 26, 31 and 32 all currently planned for use today or in the short term. The primary anti-surface ship weapons today and for the foreseeable future are the so-called Hunter-Killer submarines, of which the Royal Navy has seven with three planned.
On ground attack warplanes, do we need a new one? The Jaguar lasted 32 years and its replacement,  the first eurofighter Tornado was retired in 2018 and we are now using Typhoons, first launched in 1994, so over 25 years old although the last one was delivered to the RAF in 2019. Here is an Australian’s analysis, called “Demon or Lemon”; he comes down in the middle but definitely not a Lemon in 2000, whether it’s so in 2020 is another question and it wasn’t designed as a ground attack plane.

As I sit down to write this, I suddenly realise it could be quite long; but this first draft won’t be. I went to the tank museum and one of the information placards spoke of how the Cavalry had tried to inhibit the introduction of the tank. Another suggested that the Army is always preparing for the last war. The placards on the birth of the Tank showed the British inspiration of iconoclastic thought and the often conservative inhibitions of incumbent power. I was once told that “military intelligence” was an oxymoron. In James Meek’s review of the Afghanistan war via book review, he identifies two factors related to leadership and doctrine as failures,

the result was that the British military establishment put the preservation of its long-term budget ahead of the preservation of its soldiers in the field.
as the commanders who served in Afghanistan get their say, the dominant tone is of anger towards the Ministry of Defence and the army itself, which emerges as an organisation incapable of learning except by years of trial and error when real wars come along.
The army that went into Iraq and Afghanistan was hobbled by its lack of back office support. Defence Intelligence, the MoD’s in-house intelligence agency, had got rid of its linguists. The MoD’s main research centre was privatised in 2001

This led me to look for more evidence, I found, Games: Conflict, Competition, and Cooperation by David Blagden (Editor), Mark de Rond (Editor) , which is an anthology, [abstract citation | googlereads | google books]. I bought it and read the Ledwidge article, and have posted a stub about it.