It seems I have not stated that I acquired a THECUS N3200Pro a couple of years ago. I have been using it happily since then, but today, my W10 system upgraded to SMB 2 and my connections failed. Here’s my notes …. 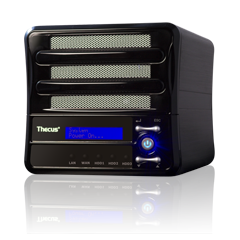 I upgraded the firmware in the hope that the system would upgrade but it din’t work. Not only that but the ntp connection which is essential, the box’s clock is shite, failed. This problem looks to have been a DNS problem so I specified the Hub as a gateway and DNS server and that seems to work.
Here’s what MS have to say about SMB v1, I turned the NAS drive’s FTP server on and connect using that and FileZilla. I checked out the command line arguments, again.
The ftp service won’t allow uploads i.e. writes, I muck around with TLS and non-anonymous login, but eventually decide to install smb v1.
I used these instructions.
I was still bugged by not solving it using ftp, and so I went to the Thecus site and found these articles

Strangely, the cable goes in the WAN port on the NAS box & one of the [yellow] ethernet ports on the BT Home Hub.

It’s been a while since I have had this, so it’s not surprising.
I think it’s 1Tb delivered storage, so perhaps buy a disk and attach it to the network via the Pi. (Actually, it’s 1.81 TB).  Is there any RAID software on the PI? Yes! It would seem that LVM is available as part of Raspbian. I plan to continue this thread at “Raspberry Pi and LVM” on this wiki.
Shame Mappins has gone!

There’s now a phone app. Thecus Connect, which needs a firmware upgrade to V3.0 or better. They recommend a backup before doing this.
My SW version is 3.00.03, needs to be 3.01.00 or better, it seems that we are on Version 5. Here are some links;

3.00.03 is the most recent version that runs on this hardware.