I was thinking about the Brexit vote and the way that Immigration came to dominate the debate; there were a couple of factually based articles which examined the numbers, and some economic analysis which argues that like a deficit, immigration is a good thing. Anyway, despite the fact that evidence is of no use in a post truth environment, I decided to have a look at the figures. It’s also a good opportunity to repeat Luke Sorba’s joke, that Socialists treat immigration as the Victorians did sex, we know it happens but don’t want to talk about it. Here are my notes. The number of economic migrants coming to the UK from the EU over the last 5 years is under 30,000 p.a. Given the amount of noise made by the outers,  I was expecting the numbers to be much higher. Is this really accurate i.e. have I made a mistake? I’d be grateful for any comments. (It looks like my numbers are 10% of others, so I need to check this out.) When I say, I’d be grateful for comments, I’d be grateful for comments on my methods.

The 2016 Summary is here,  and talks about 327,000 net immigration.
When writing the blog article, I found these links,

My sums and findings

My source data is from ONS
https://www.ons.gov.uk/peoplepopulationandcommunity/populationandmigration/internationalmigration/bulletins/migrationstatisticsquarterlyreport/may2016
I used the following spreadsheet. Home Office Immigration Stats, this is an Excel file, and here is my analysis worksheet, Immigration, also an Excel File.
I have transcribed the data, summarised it and presented it in chart form. 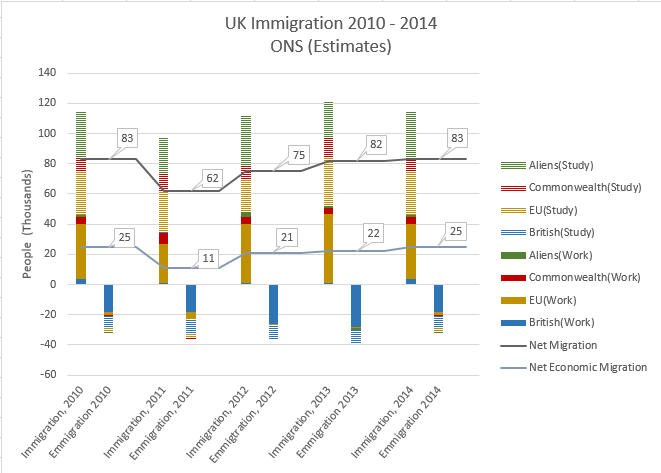 The original data is presented in annual form, and presents the data in various breakdowns. The figures are estimates and therefore corrected where necessary. I chose to present the data as British, all EU, Commonwealth and others (Aliens, no really!) It is possible to break the EU down in various ways based on date of acession, so we can measure, sort of, the number of recently acceding states as the source of migration. I don;t think we need to do this and so didn’t.
EU Workers as a proportion of immigrant workers varies from 76% to 88%. The maximum ratio was in 2013, when economic net migration was 22,000. 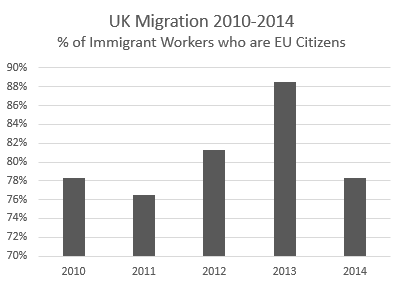 Given the amount of noise made I was expecting the numbers to be much higher. Is this really accurate? I’ be grateful for any comments.

Here’s one more chart, the majority of entrants remain students. 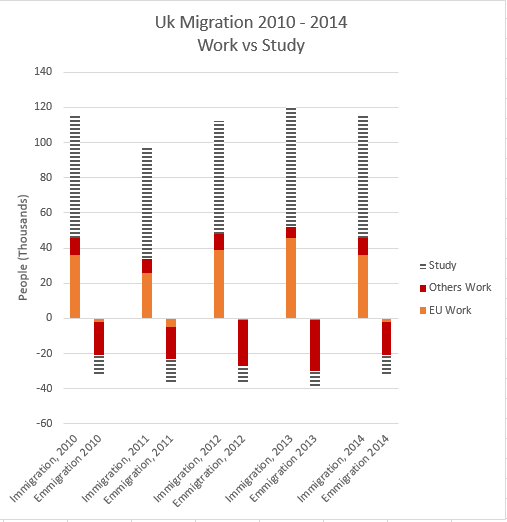