In my run through Neverwinter Nights 2, I have come to the Keep, which is the Stronghold for the protagonist. I have never played D&D with a “stronghold” before and this one would seem to have a lot of playing within it. I hope it doesn’t lead to too much of the resource based gamesplay style; but it seems there’s plenty of fetch and carry quests and Kana looks ready to keep me busy.
I have checked out these two walkthroughs pages.

The latter is particularly good at explaining the impact of the building works.
I have built a graph, assuming that we want money first in order to finance the rebuilding. 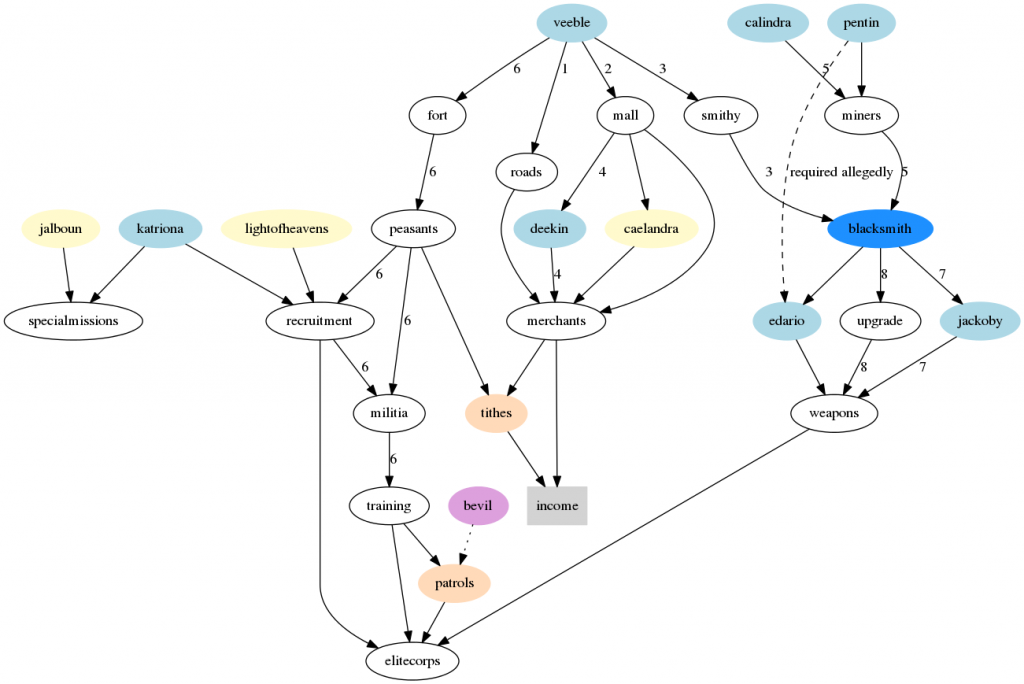 The development of Crossroads Keep, a graph using dot

Let’s start with the money.  We need to build the mall, and some roads; Veeble the Stonemason maybe the first bottleneck; he’s quite quick. (He completes everything by the next visit. Given you have to recruit the staff, this is the critical path and cash is the bottleneck.
It might be wise to explore Kana’s conversational opportunities thoroughly at each conversation.
Pentin is stroppy, I failed to intimidate him to stay, and I am a Barbarian with intimidate as a class skill, reinforced by pre-adventurer background (I think).  So I replayed it, intimidate is influenced by CHArisma and I don’t have a lot of that so I bought and used a Harvest Cloak and drank a Potion of Eagle’s Splendour; the intimidate still failed but I was offered a diplomacy after and that worked. What’s my Diplomacy skill? I have been investing in it because I need a score for class swapping latter. Anyway, he seems to be there and I have also recruited Edario as a second blacksmith which the walkthrough says needs Pentin as a pre-requisite.  How do I keep them busy with Iron Ore?
It may be necessary to repair the library before proceeding to Ammon Jerro’s Haven.
I need advice on tithes, although I have placed a small tithe on both the farmers and merchants while developing the stronghold i.e. before leaving for Arvhan. It was Kana’s idea and I am not sure if this offered only after certain developments in the graph. On return from the Temple of the Seasons, I sold a bunch of excess goods and finished the roads and the library. On return from the Guardian Ruins in the Swamp, Kana offered a year end tax policy decision on the farmer’s taxes. I chose to set them at Lord Nasher’s average and promised to reduce them when possible. I also told the collectors not to use violence.  Also on return from the Temple of the Seasons, the Treasury had generated some cash, about 6000 gp.
In Act III, the Game Banshee Walkthrough makes some suggestions as to order of quests, each of the alliance quests (except the Druids) leads to some ‘ore’ and I had run out. Edario the Armourer wouldn’t upgrade the armour without it. I think it best firstly to go back to Neverwinter and take the first test with Light of Heaven & pick up Joy (oh err). Secondly go to Port Llast for the second test and the route to the Wendersneven; the Strange Clearing has an Ore source. On return to Crossroads keep, you can pick up Light of Heaven and re-arrange the sergeants. LoH on recruiting, Katriona and Bevil on special projects. I have failed to persuade Jalboun to join me. (Is there an exclusive choice between Jalboun and Light of Heaven, depending on the good & bad paths through Neverwinter?) Anyway at this point, I got fed up with the continual low security in the land, I think I have failed some important special projects because the size of my militia is so low. I have lowered the threshold of recruitment; this may have best been done immediately after the creation of the captain’s company; it will make the Ziffer the Bailiff quest easier to win. I lost it because I was trying to defend the quality of the militia recruits. Another piece of advice is not to follow the walkthroughs so carefully. Doing the economics first is probably best.
Also The Road to Highcliff has ore, but it can only be encountered once AFAIK. Don’t miss it.

This is a FAQ on the keep at GameFAQS.
For more of an idea as to what a stronghold might be, see Kismet’s Review of the Stronghold Builder’s Guide