I got distracted during a debate on Google and their regulatory need to delete out-dated and irrelevant entries in their search index. How big is google in Europe?
I found the following sites/documents (using Google 😆 )

While the former is dated 2010 and the later 2013, I have combined these sources to get the following graph. The countries are sorted by number of internet users. 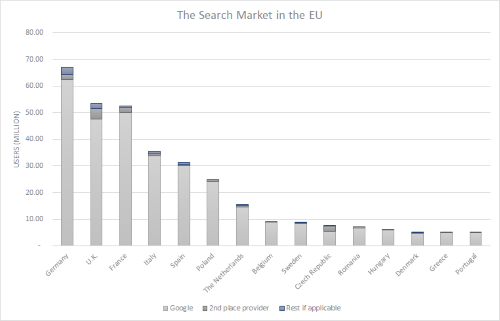 In most cases the 2nd provider is Bing.
The countries included are driven by the returnonow list. (It has the EU’s largest countries by population, and I used the Pearson document to add some obvious omissions, including Portugal, Greece, Hungary & Romania. )
The spreadsheet with the data table is here…. It includes a number of other non-European countries.
cloudEuropegooglemarket shareTechnology