There’s only so many times one can play the official campaigns and after about 4 years I began to look for additional content. Obviously I have the Kingmaker Expansions, but for various reasons I decided to look further. This page is impacted by the bioware hack and also by the collapse/destruction of the original vault. This was replaced by a new vault, https://neverwintervault.org/.  Otherwise, here are my notes, which consist of sections as follows,

Bioware seeded a community site, http://nwvault.ign.com/, which was abandoned and replaced by the community sourced  https://neverwintervault.org .
The new Vault has a nearly made it page, called the Overlooked Module list, with separate pages for NWN1 & NWN2. Find them using the Vault’s search tool.
The original vault had a number of recommendation tools, and I have found,

The Bioware Forums had a thread called, the Hero’s Path, a sticky in NWN Modules Discussion forum. The originator says,

When I transferred this article from the Snipsnap bliki to here, it became clear that the Hero’s path’s home had been lost after the Bioware Forums’ hack. I found Berliad’s Blog, which pointed at the old Bioware forums, and started to look for a new location for the list, I found it, several years later; the new vault has recovered the thread, the Hero’s Path.
The list pointed at amongst others, renditions of famous PnP stories including the Giants Series and Descent to the Depths of the Earth, concluding with Queen of the Demonweb Pits. I have these linked in my vault portfolio. While following the the Hero’s Path at Bioware forums, I came across Journey of a 1000 miles

In order to play Journey of a 1000 miles, I needed a 12th level character and so found the Pretty Good Character Creator / Customizer (PGC3) powered by IGIPE and Boutique du Temps. used +PGCC to create a character for “Journey…”, I’ll let you know how awesome, the generated character is when I am done. I have also tried Boutique du Temps, which is very expensive! I also found The Lion’s Head Tavern, which has an Inn and a shop, where you can buy pretty much what you want, Armour, Weapons, Magic and more ordinary stuff. This pretty much allows you to create and equip a character for any adventure/module. (It may well be the basis of re-awakening my interest in the game).

I also came across recommendations for the following NWN modules, I can’t remember where, Tales of a Mage, levels 1-5, arcane caster only,  Resurrection Gone Wrong, which is claimed to be humorous, character levels 1 – 7, but sounds like a serious breach of the 4th wall and The Aielund Saga.
I found Beneath the Cobbles, which is awesome. 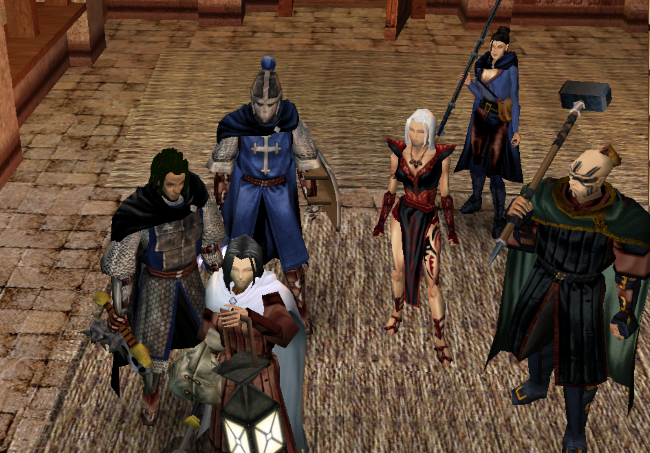 See the comments for Stefan Gagne’s games which sounded good, but I can’t find today. I have emailed him.

I found this in 2018, the Harp and the Chrysanthemum, which is allegedly beautiful; its NWN2, see also my page about it here, it hosts the game as a zip.
This seems to be a cross between a game and persistent world, https://www.playneverwinter.com/en/about which is reviewed here on Youtube.
I found this, Bad Habits, a monk quest.

There is a thread at g3.net called What are some of your favorite NWN modules?. It includes recommendations.

Ideas from the NWN Podcast

Some ideas have been generated by following the NWN Podcast. Those I have found include, Sanctum of the Arch Mage. This is their site.

HotU is meant to be played using your character from SoU, despite meeting the NPC’s from Neverwinter Nights. These two adventures are meant to help you obtain the additional levels between the end of SoU and the beginning of HoU.

A bunch of enhancements on which several/many modules are based. This is now held at the new vault., they have descriptive comments.