I started using Planet in about 2006, it would seem? I rapidly came too “Planet Venus” and this article was originally written during that time, and was copied from the snipsnap wiki, itself copied from my sun blog. This article focuses on installation and administration. It includes links to my scripts. It was heavily amended in June 2020 in thanks to the location of my tools and Sam’s code being on github.

To which I add,

I developed a personal ‘mingle’ which is hosted on my 1and1 h0sting server, davelevy.info. (I had to install xslt from a tarball to do this.) The mingle look and feel is good so I shall persevere. It is now available online at http://davelevy.info/mingle. Mingle is installed using patch 😪
I then wrote some shell scripts to help me manage multiple planets on a single UNIX image which I posted to github to a repo, imaginatively called ‘planet_tools. In 2020, I had a disaster and after the recovery moved my “How to” use my tools to the github repo wiki.

Python has a config file parser, called ConfigParser which works using a “keyword: value” syntax, it might use other formats also. I thought I might incorporate this, but never got round to it.

I posted an article at my/sun oracle blog which detailed the architecture of Planet Venus. 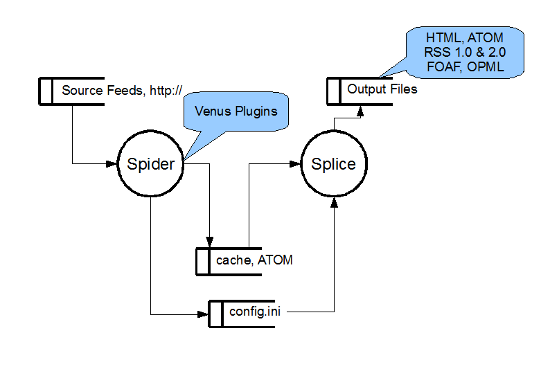 The script planet.py runs two other python programs called spider and splice.
Spider gets the feeds defined in config.ini and creates a local cache version, splice, reads the cache and generates the new formats from templates. The diagram does not illustrate the template source files for the output formats and I shall probably need to dig further into the code in order to understand what needs to be done.

Fortunately, I had not lost my cache directories, but I reinstalled Sam’s code from git, using git clone and then installed my tools. I then made a Logs/mingle.log.i file containing 0.

You need Python, V2.2 or better, not hard today. 6 June 2020
There are several ways to install the package, but git is now recommended.

I needed to install planet venus on 1and1, so I used git clone to download the code.

I downloaded my tools, and amended functions to define a new BASEDIR. I do not have root access on this machine. runtests.py stated that libxml2 and xslt are both missing so I installed them from source.
I used git clone to download them from

and then mucked around with the automake tools to compile them. It’s good that we have access to the automake and gcc toolset. I ran aclocal, autoheader, autoconf and ./autogen.sh to create a ./configure. I ran ./configure with a –prefix parameter set to a directory in my file space.  I found

The errors that occurred as I guessed what was needed didn’t take too long to understand, it seems that all three auto* tools are needed to create a configure script, and then I need to set the local parameters.

I have had problems installing Venus on Centos 5.3, and have written up my adventures on my Centos 5.3 page.

This is pretty out of date, it may be better retired.

For Ubuntu you need and may thus need to install python-librdf, libxml2 & xsltproc. The need can be assessed by using run_tests.py. The packages can be installed using apt-get . librdf is optional see FOAF below.

and then, I use

as the code to pull the updates. Any comments on this appreciated, I have not yet finished testing this code. I run it twice/month. DFL 15 Feb 2011.