This was published in 2009, the product has been superseded and the version dependent facts are over eight years old. This may not be as useful as it once was; the article talks about installing Laconica on an Ubuntu VM.
Is twitter or microblogging a service that would benefit from more active community management? It would seem that the people at friendfeed seem to thinks so but the people at Laconica have produced a package that allows for the hosting of a microblogging community.
Despite Peter Reiser’s statement (on his twitter feed at 1.41 am GMT 3rd Feb) that it installs on Solaris like a dream, I chose to install on Ubuntu Linux and there is a specific install page for Ubuntu at the Laconica site. It’s also useful to look at the README as it documents the pre-requisities and discusses the location of the site within the webserver’s root namespace in more adult fashion than the Ubuntu install page.
I installed version 0.6.3.
Critically you need Apache 2, MySQL Client Tools (& Server) and PHP 5, of which the latter two seem not to be installed on my version of Ubuntu (8.04 LTS Hardy Heron). (Actually I didn’t document my processes well enough and not everything was necessarily done in the correct order, so PHP might have been there, but the extensions weren’t.)
I had Apache 2 on my system, so I created a user to act as the Laconica administration user, ignored the suggestion to untar it in /var/www, the apache root and created a subdirectory.
It is best to now use the package manager to update MySQL & PHP, read the pre-requisites as you need some of the extensions which the Ubuntu package manager treats as separate packages. I found the Curl, MySQL and GD extensions. (I did this last and some stuff broke without the GD package.) I also re-installed the mod_rewrite package, as I had a problem and wasn’t sure of the cause.
Then its simple, wget and untar the package, edit the config file. The path parameter is relative so no preceding /, not ./
And up it comes, I have made a post, changed my avatar and checked the RSS, and I did it all in a Virtual Box image.
See also https://blogs.oracle.com/DaveLevy/entry/do_we_need_private_community 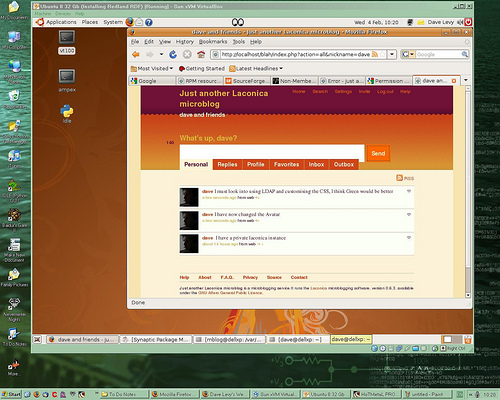 Next, I want to look at the CSS and LDAP integration.