I bought one of these in February 2006 and it went bang for the 2nd time in the Summer of 2014. I could probably get it repaired but I can’t be arsed. 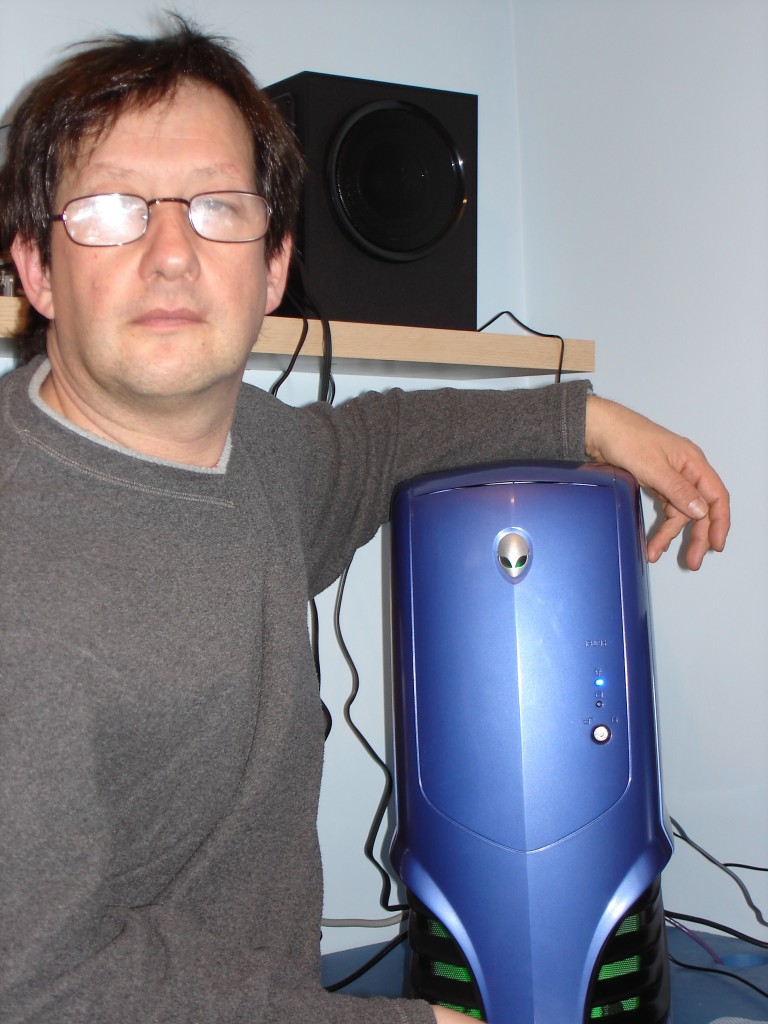 Not exactly desk side size

I want some more Memory. This page at msdn documents the real limits for 32 Bit Windows XP. So I decide to buy another 2 Gb to take it to 3 Gb, and utilise the unused two slots. Alienware no longer sell RAM this poor, so I need to buy DDR PC3200.

Crucial got back to me and recommended this, so I bought it.

It developed an intermittent boot fault and I used the Alienware remote support site. They said,

In their knowledge base, they have an article decribing “How to add a disk” which is close enough to guide me. It also references “How to remove the left side panel”. I am unclear if you need to be logged in to the site to see these pages.
I have documented my actions as comments.

Next time, use the web form to make a very short problem statement, then use the case management form to add further diagnostics. The first form has a very narrow text box and inserts line breaks where it thinks appropriate. This makes the initial post very hard to read.

The Alienware login is domain specific, so .co.uk is different from .com. You need to login to the support site then sue their tools to find the trouble ticket. In the case of UK customers, use the My Hive page.

After reseating the connectors, it booted to XP but the mouse was frozen. The disk light was orange and flashing. I rebooted and tried to run chkdsk. They recommend using a cmd session, which I did, but this version of XP refuses to run this against C: (the only disk) from a user session. I scheduled a chkdsk on boot, and rebooted the computer. Unfortunately, I have a life to lead, but when I returned to the computer it was offering me a login prompt. i.e.a choice of logins; several people use the machine.
I have to say that the connectors seemed well seated.
So the good news is that it has booted from the HDD twice. I have asked the nice alienware people whether there’s anything else they’d like me to do.
So, time for bed, shutdown the machine and it offers me a closedown with update and I say, Yes. It then fails to see the disk, unless I was impatient. It seems to hang but I then press the little reboot right now button and it comes up.

The machine boot nicely although I struggle to get the printer to work, although this may have been a network issue; I was trying to print from another computer. It boots several times.
In the evening, it fails to boot. I get the black screen boot. The warning lights go orange (HDD), green (CD), it’s empty, green then organe, then nothing. I cannot hear the disk spinning up. The screen is dark, i.e. it is rceiving a signal because it displays that its searching or that it has no power when in those conditions. I think I reversed the boot order to HDD, then CD while trying to fix the problem on my own. I try to reboot using the hard reboot button and the power off button, even unplugging it, but I get the same sequence. N.B. Remember the definition of insanity. I then opened the system up and reseated the connectors once again, the system booted, the mouse froze and I forgot to reconnect the keyboard. I moved the usb mouse to another output socket, and rebooted the machine, probably using the hard reboot button. It came up fine.
Again the connectors seemed OK, I wonder if its the other end of the bus.

It fails to boot again, in the morning. Document with Alienware. I should also test it in the evening, without changing anything to see if it remains intermittent. I tried to boot, hard reboot, and poweroff reboot. None worked.

Alienware reply saying they think its the connector ribbon and I should buy another, I think that it might be the motherboadr end of the connection and it seems to be looser than I would expect. I press it in firmly and the thing still refuses to boot. I reboot and eject the empty CD-ROM and get the BIOS back so I reset the boot device order to CD, then HDD, but it doesn’t reboot.
I reopen it, ensure the mother board end is connected remove and reseat the disk end of the ribbon, and the machine then starts. Hooray! Now to see if this is fixed, or it remains intermittent.

I used Windows to close the machine, and the button to start it, and it started fine. Now lets see if it degrades.

Yup. It won’t start. However, if I eject the CD while the bios is browsing, then the system came up. The ethernet port was disconnected, and I soft rebooted successfully. This is odd. Is it really the connectors? Why doesn’t the bios display on the screen, if the error is the disk connector?
Maybe I should turn it off and see what happens later today. It would be nice to know if the CD trick was non-intermittent.

I turned the computer on, and it found the disk but started up with the white=purple problem which looks very grainy. I used windows to request a reboot and the same thing occurred. I closed the system using windows, then re-started it using the start button on the front of the machine and the system started up fine.
So it saw the disk, this is good, but still required some mucking around. I should tell Alienware about the recent CD and Screen symptoms.

I closed the Alienware ticket. The boot seems to be reliable. The system seem unhappy to remain in screen saver in my user, but the two day download in Ben’s user doesn’t seem to have this problem. It could be the Alienware theme that is the problem. I need to raise a ticket next time I get the ‘grooved purple screen’. I have not really reported the other oddness, including the CD problem/symptom.

Too early. The minute I close it, the system degrades. I reopen the ticket at Alienware. It is behaving poorly. No amount of fiddling around makes it behave reliably.

I was instructed to undertake some tests as a result of the ticket raised on the 4th June. This involved clearing the CMOS memory and then testing the DIMMs and DIMM slots, then reseating the disk again. I have undertaken the tests, non of which enabled a successful boot. I have now raised ticket 080622-000196.
I wonder if I should replace the CMOS battery. I wonder if I should create a Linux Live CD and see if it’ll boot from that. One theory is that the bios is faulty, the other is that the disk (HDD) has failed.
N.B. I did not clear the CMOS memory at this stage, merely removed and reseated the CMOS battery.
The Linux Live CD fails; it behaves identically to an HDD boot.

Having repeated the tests documented in the 22nd June comment, I have been asked to boot the system with no memory, this should provoke an audio error. It doesn’t, so looks like a motherboard failure. Bother! I need to see if I still have the box. Alienware have offered to repair it.

I rang them today to ask where my box i.e. a cardboard box was so I can return it to them. Its been lost, presumably by DHL. I need to ensure that I get a dispatch number tomorrow via e-mail, or ring to chase it. Its been over two months since I first rang them about the problem.

I rang Alienware last night, and spoke to technical support who stated that I had not placed an order for the repair, and needed to do this before they would reopen the trouble ticket. To do this I need to ring billing. He also stated that despite the return number being issued, it is quite possible that there will be new returns number as they formally raise a quote. This came as quite a surprise since I have what I think is a quoted in ticket 080622-000196 (6) and return instructions in ticket 080711-000131 (9). The issuing of return instructions I undertook to be acceptance of an order. I got into one of those never ending loops.

Me: I have a quote, its in the trouble ticket
Them: There is no quote, its not in the system.

So this morning, I ring billing who tell me I need a quote, and he doesn’t know what value to raise the quote for. I have some extreme difficulty in convincing him that I have a quote. He asks me to wait ’till technical support issue him with a quote. I finally convince him to go to ticket 080622-000196 (6) to get the price as I have been quoted £239 there. I explained that I do not want to release the computer to DHL ’till I know that the returns number is valid. I am asked to wait for a reply e-mail for a quote which he has just sent to technical support. This reminds me of Moss sending an e-mail when fire breaks out in “the IT crowd”‘s office. I tell him I have a deadline of noon today. I finally convince the agent to read trouble ticket 6. He accepts this is a quote, but can’t raise one, because he hasn’t received an e-mail. I ask him if I should cancel DHL and he says he’ll ring me back but I can ring in two hours time if they haven’t got back. He doesn’t know if the return number is going to be new or not.
I rang customer services and asked for a supervisor/shift leader and spoke to a supervisor. She stated that they’d be back within the hour to close the loop on the quote, that the price quoted in ticket 080622-000196 (6) was good and she stated the return number raised in ticket 080711-000131 (9), RO 1079320D will remain valid. A ticket has been opened which I can use to record correspondence about the return, called “Call for Supervisor”.

I rang Alienware to see if the machine had arrived. They confirmed it arrived on Tuesday 5th August. The Repair Order is still not posted to the My Hive support page’s invoice list.