This article has links to the Bioware forums which are now broken. See BiowareCommunity Forums V1.It is the notes a made when running through the game the first time. I chose a Paladin and took some bad advice. I am really not sure about running the first four levels as a fighter to get the bastard sword proficiency. The Paladin is not as tasty as I expected from V1 rules. (See below).
This needs the full size images uploaded.

GameFAQs has an NWN Page which has a Paladin Guide. It might be nice to put it up here with hyperlinks etc. to make it easier to read, but I’m not sure of the legality or manners. I never found the time.

Lord Zero, the author, has some advice on starting attributes, the most important of which is start with high Charisma. He didn’t empasis the need to have a high WISdom for the spell bonuses. The other two top tips are:-

I didn’t get that high and I need to find out how the Paladin aquires spells (see About Attributes below, as I seem to be missing a few at the end. I wonder if the order in which one aquires the levels is important. (No, thats not the problem.) 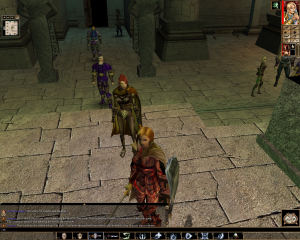 Chanita the Paladin, returns to the Temple of Tyr late in the Game

I used a Bastard Sword from the point that I got the Exotic Weapons feat, I occasionally fell back on the Kinslayer, as it was capable of more damage and also caused fire damage.

The Kinslayer is a two handed sword and so just excellent. I am not sure of Lord Zero’s advice, it seems to me a waste of levels,, I’d have been better off with am extra four levels of Paladin, and the exotic weapons don’t turn up. Basically, Paladin’s arn’t as kick arse as in the V1 rules.

I found that I had less spells then I expected as the Paladin approached the higher levels. I asked at the Bioware Forums and started a thread called Help in understanding how to build a Paladin which explains how Wisdom impacts the ability to earn spells, both enhancing the number of spells/level and constraining the levels you can learn. (I should have remembered some of this from the earlier rules!)
In summary, you need a WIS of 14 to get the full spell complement, if you have less you fail to get bonuses amd fail to be able to learn 3rd and/or 4th level spells. I am now unsure if the advice about taking four levels of fighter is any good as you loose three levels of Paladin and hence three levels of spells.

I’ve never played a Paladin under these attribute allocation rules and so have never been restricted in this way before.

I prefer to pick one and keep them, so they maximise their level growth with me. It seems to me that the two best might be

the elven cleric, because she can heal or

Her song will enhance the player character, unfortunately, she’s very weak and dies a lot ( at lower levels), even when told to attack with her bow & spells. She also uses a spear, which looks terrible. 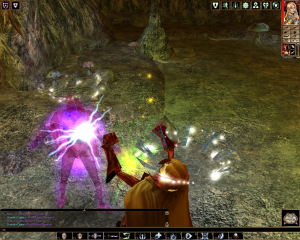 Chanita and Sharwyn buff up

However, her quest yields a belt of charisma – very nice for my Paladin. She has healing spells as well so quite good. She’s getting better as she acquires more spells, I’ve noticed Bull’s strength, which is good for a Paladin, since strength is low to yield the Charisma. (See also NWN Henchman, Sharwyn.) I used the Henchman Inventory & Battle AI mod v1.07 which allows one to have a better control of your henchman’s tactics, actions and inventory. I found that she used scrolls rapidly and became a major asset in casting some pretty high level scrolls, including planar binding, which summoned a Death Slaad. Her song towards the end is also a major asset.

I got the Scabbard of Bless and Aid, which was very useful.

The most difficult fights for me were Rimardo Domine & his Iron Golem, although some of the other fights in the Host Tower were also a bit tricky, and Brother Toras, in the Arcane Brotherhood Tomb outside Luskan. Interesting that these were undertaken at a point where the four levels of fighter might be denying me some extra Paladin feats, skills and spells.
Morag herself, wasn’t really hard, although I lost Sharwyn at this point, a tragic but heroic death!
King Oubold Many-Arrows was easy and so was the Green Dragon and the Balors, I wonder if I’ll find them so easy as a Bard or Wizard. 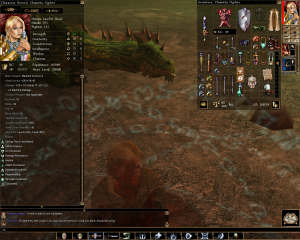 See I did kill the Green Dragon! (See also my walkthrough about the dragons where I discuss the “good path” and suggest killing Akulatraxas, the green dragon for the XP.)