The bulk of this snip was written in 2008, much has changed since, although I am still, annoyingly a Sky customer. I updated it in November 2013 when I upgraded the box for free.

I have just spoken to Sky who have offered to upgrade my skybox for free. So that’s good then. I will be getting a skyplus box with 500Gb of storage and a 12 month warranty. In addition I will be able to connect to sky’s non-satellite channels (catchup, on-demand and store) using the internet and my wifi network (this should be exclusively the return channel manager, although maybe some of the content is delivered over the internet). The network looks like this at the moment.  1 Dec 2013 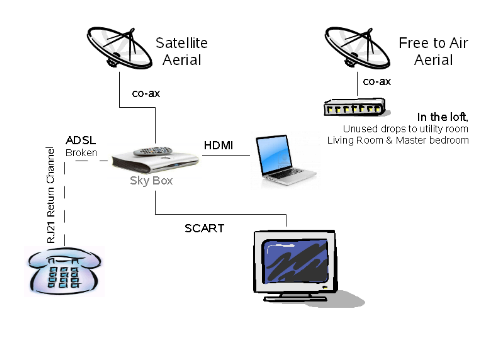 I get Sky, the free-to-air reception is poor where I live and I need to improve my services.

I have rented TV and Video/DVD player, and a Skybox. (The DVD has now gone back, and the rental ownership facts are now wrong. We use a laptop and wifi to use catchup TV. I need to work this out. We can do better. Also, technically it seems we don’t rent the Skybox!) 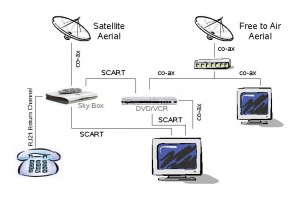 The (traditional) ariel on the chimney, is connected via a splitter box to the video receiver and the second TV set. There are three SCART cables, between the three boxes in the room, the TV, Skybox and DVD/VCR.
Some time ago the cable between the phone and the sky box was damaged and so became unusable. Later it was discovered that this damaged line caused significant degradation to the ADSL service and so was disconnected from the phone system. DFL 14 July 2013

On the 22nd May, the remote control handset for the Skybox gave up. I tested it with three sets of batteries, so it could be the box. I have decided to try and replace the handset.

I can consider ‘Freeview’ or ‘Freesat’. Freeview comes over the air, or via Sky. Boxclever state that the quality of the terrestrial digitil signal has probably been improved since we last tested it and costs about ?2.00 for a months rental for a Freeview box. Maybe we should try out the free-to-air Freeview service as a test. The minimum contract is one month, and if it worked it would solve the 2nd TV problem.
Freesat would require a new aerial, but is a retail purchase i.e. no subscriptions. It has more channels than Freeview and is claiming to be investing to increase them. No Channel 5, and no Deutsche Welle, but it does include Euronews. Freeview includes Sky News and One, Freesat does not.
Boxclever can’t rent us a Freesat box.
The BBC have a web page Digital TV without subscription that helps to understand the position.
I have no idea what this means for BT Vision, although they said last time I called that Freeview is a pre-requisite. If I propose to take a BT Vision service, I must rationalise my BT services and billing processes.