The Ninafer mod for BG1 was hosted at the “Chosen of Mystra”. I found that her installation files seem to have disappeared from the internet. I have uploaded my disk copy to this page. The best I can offer is this zip file, called Nina.zip, it contains a setup.exe the .tp2 file and the supporting folder. I talk a bit about her, and document my mirrors; there are two pictures, one of which can be used with the mod. 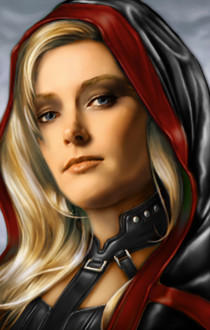 She is a Lawful Neutral, female fighter-mage and has been developed in the spirit of the One-Day NPCs. I played using her in one of my BG1 runs but in 2014.
When published  we were promised enhancements. I had some problems getting it to work for me and so I waited for my next run through to see if it got any better. She’s rather tasty as a fighter/mage, good archer!

One of my problems with Nina, is that the mod. uses an amended picture of Viconia, so when playing with the pair of them in a party I got confused. I obviously have an option to change my Viconia picture, but actually there weren’t a lot of good drow pictures, (or at least I can’t find them). The author’s vision is obviously a blonde, and she also says she’s not prone to getting her kit off, so some of the more common fantasy type pictures are also inappropriate. I found the picture above and have packaged it as a zip file in the Downloads section of this page.
Probably originally written in 2004/5 and copied to snipsnap in May ’06, copied to wordpress in 2013, amended in Feb 2015. I also closed my original Nina page in March 2015. Amended again in Jan 2019.